Consolata Missionaries in Kenya began the Consilata Seminary in 1971 which began a new phase of formation which was previously done by the diocesan seminary as the seminarians were studying at St. Thomas Aquinas. This was after a lot of considerations. Therefore the seminary was constructed not far from St. Thomas Aquinas Major Seminary.

Currently the seminary is adjacent  Brooke House School and Nakumat Galleria, along Magadi road. This is a place which many activities takes place not only the formation of the seminarians but numerous things which include first and foremost education of other seminarians from more than 22 congregations under a school called Consolata Institute of Philosophy and at the school the courses being taught and are pure philosophy under very qualified lecturers who are either religious or lay and who teach even in the public universities and other great private universities. Therefore the school is open to both religious and lay students who learn philosophy, religios studies and humanities. We also have the Consolata Language Center in the same place where they teach many languages whch include the latin languages i.e, Italian, portuguese, Spanish, latin and French, German, Chinese, Japanese, etc.

Apart from academics we also have the workshop which comprises of the carpentry workshop, metal workshop and garage. These places seminarians especially candidates to brotherhood and all those of priesthood who want to learn are taught different skills by the able experts; Bro. Gaitano, Mr. Ouko, Bro. Wamalwa, Mr. Gatimu among others.
We also have the shamba that provides 90% of the food that is consumed in the seminary and others are sold to the outsiders at a very friendly price. At the shamba we have the green house that provides very sweet tomatoes, we also have the onions, cabbages, different types of Kales( sukuma wiki), bananas, oranges, ovacados, mangoes, tulips, spinnach. then apart from vegetables we have rabbits, chicken of all types both broilers and layers, we have different types of cattles with a well caltivated land of nappier grass. These are works done by the seminarians themselves at their free time and hence making them fit in all dimensions.

We also have a great football, basketball, volleyball and loan tennis team with well maintained field. furthemore we have also in door games and we cannot forget the fundamental reason why we are here, prayer life, we have spiritual directors who are Consolata Missionaries and they do a great job we also have mass every morning and recollection once every month and retreat once in every formative year.
After three years in Consolata Seminary one can decide to go home or continue and those who proceed can either go to Sagana or Mozambique for the Novitiate and hence would need to learn Portuguese then later on go for theology in any of the continent where the Consolata Missionaries have the theologicum and for the candidate of brotherhood they do different courses which the congregation is in great need of.
Basically, thats all about us incase of any more information don't hesitate to contact us. 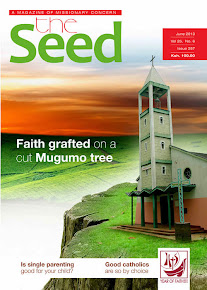 Our founder and Our Lady Consolata